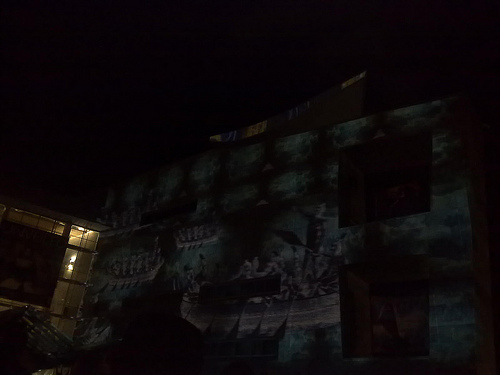 Part of the Visual Arts programme in the New Zealand International Arts Festival, First Contact was one of the free opening events for the 2012 festival. Tuffery was given special access to the Te Papa collections – what a thrill to be able to look in all those secret drawers and files! Museums always have more out the back than they are able to display in the public spaces. Sometimes that stuff is too delicate to display, or not in the right condition, or the museum doesn’t have the right display spaces for it. Tuffery aimed to bring the museum inside to the outside by projecting it onto the two main building facades at the front of Te Papa.

The opening starts off quite slowly with wiggly-sharp lines and breathy music reminiscent of the beginning of the world. It rolls through Pacific peoples and artifacts, European contact, natural world collections in the museum, art, shelving and file drawers. On the Festival opening night there were live performers and live visuals mixed in with the projection.This was pretty cool, even if I couldn’t see the performers most of the time. (I was standing behind a group of tall people who somehow managed to migrate closer to me as the evening went on.) My favourite parts of the evening were the men with poi, the amazing dancers, and steam punk Maori style.

This is a fairly long show (90 mins) so take a chair if you plan to stay for the whole thing. Further back (towards the road unfortunately) is better so you can take in both sides of the projection. There won’t be live music so download the soundtrack before you go. There do seem to be several sections so I think it would be okay to see part of it one night, then another part another night. I thought there were lots of witty and clever moments scattered through the projection. Sometimes that came from use of the building (i.e. objects that float across the top of the windows) and sometimes that came from the way objects were used (e.g. portraits looking at each other.) I also liked the way that the implements of archiving and preservation were used.