Well. This thing is moving faster than expected. (Mostly because I can’t keep my big mouth shut…)

Last night, at our te reo class, I pitched the idea to The King (part of the Design team.) I hit these points:

The King was pretty receptive to the idea of trying an alternative to the worksheets that are usually used. (When he said that, it sparked that I like the idea of having something tactile for the people to hold and play with. ‘Things to hold’ got added to the list of stuff to include.)

I’ve had a few ideas for how the story might go if we use Twine. Spider Baruk suggested I check out App La Carte. After a quick look, it looks a bit fancy for a first outing but I’ll take a better look later. (Not having a phone that can use apps means that I don’t really know how they work. Therefore, YMMV on how ‘fancy’ it is.) Then that reminded me of En Route, an audio based tour of Auckland. It doesn’t have the branching options but that might work better.

This is part 2 of an ongoing project to redesign the library orientation for the Design and Entertainment students at the kura.

Part 3: Provide a hands on activity

Our Design, and Entertainment students get a library orientation at the beginning of each year which is okay but I reckon it could be better. Here’s the first glimmerings of an idea for orientation next year based on the six bullet points from Matt Finch’s Show Me the Awesome: Immersive play in the 21st century library.*

Steal an idea I’m going to steal the idea of City of Souls Auckland Libraries’ “interactive adventure containing zombies, violence and mayhem” and mash it up with a (sort of) discovery game that a designer in their first year of study presented in the library earlier this year.
Tell a story  Not 100% on what this might be yet. A designer’s journey through the design process? A quest of some sort? I will need collaborators for this bit to also ensure that the learning outcomes are met.
Provide a hands on activity The aim is to have it be a mix of clicky-clicky through the story and go-have-a-look-on-the-shelf. What I’m thinking here is “You find an [ITEM] at [DDC]” with [ITEM] and [DDC] being selectable options. There will be an instruction to pick an item from the shelves. Or maybe I’ll put something in the item which determines what they choose. #NeedsMoreThinking
Provide a rich language activity There’s an emphasis on sharing personal discoveries and building on that information in this kura. I’ll expect that the tutors will want to lead this part of it.
Share participants’ work! As above.
Always make them join, always make them borrow They are already signed up so that’s not an issue. We invite people to take something out but only a few take advantage of this. Not next year. Next year they’re not getting out of the library without an item.

– Talk to Designer (student) about what she was aiming for in her presentation.

– Get Design Guy and ET on board to see if we can make it work.

– Tinker with Twine. (Or similar – if you have a suggestion let me know.)

– Remember to define the scope- keep it simple this time.

*I’ve been talking to Matt, Tosca, and Moata over the last month or so. A perfect storm of inspiration. Nga mihi ki a koutou.

This is part 1 of an ongoing project to redesign the library orientation for the Design and Entertainment students at the kura.

Part 3: Provide a hands on activity

When will I learn?

Had a bit of a moment today when I recognised that I’d learned the “If you don’t like it then fucking do something about it, you dick” lesson again. Why is this so difficult to hold to? In this case it was a small thing – computer cables all over the place. I’ve looked at those cables for six months and they’ve irritated me for six months. Today I took steps to sorting them out. Six fucking months! Good grief.

I can feel things changing and ramping up again. Good.

The Wellington regional group of LIANZA held a breakfast AGM on 14 August 2013. The speaker this year was Moata Tamaira. I’ve known Moata online for a few years so was really surprised when she pointed out that we’ve only met a few times kanohi ki te kanohi. “Surely not!” I said. On reflection she was correct. We have met at a few conferences, and seen each other maybe a couple of times when I was down in Christchurch. I guess we feel like we know each other because we read each others blogs (well, I read hers) and we chat on Twitter.

Librarians, here’s what she had to say:

I really liked her comments about advocating for library service. The library I work at has external subscribers so her comments about putting things on the internet also gave me something to think about. (Most of our stuff does go on the website but I’m pretty sure we could do better.) Now I need to work out how to make it so other people can demonstrate our essential-ness for us…

Thanks to Moata for the inspiration, and the Te Ūpoko o te Ika a Māui Committee for organising the breakfast.

The immersive show that changed my life

This is something I wrote a few days after I’d been to see Apollo 13: Mission Control. Originally posted on FB I’m reposting it here because I needed to be reminded of how it made me feel. I wrote it in 2009. It’s unchanged.

END_OF_DOCUMENT_TOKEN_TO_BE_REPLACED

I’m not proud of it.

@JuliusMaskell @librarykris @Te_Papa well, as they say, The early bird gets the worm #birdpuns. it's tough for us, up against a legal eagle

We actually have more poets than sheep now. 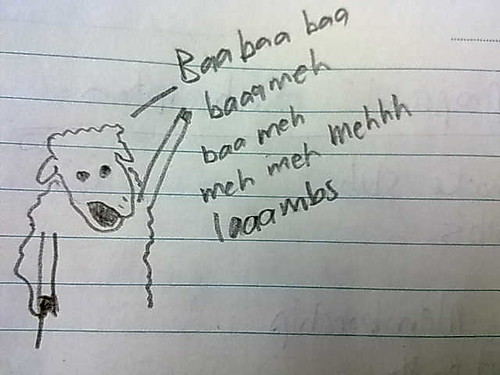 In summer 2005/2006, one of my great pleasures was driving from Auckland to Taupo for training camp. I remember it being hot and dry. I’d drive south as the sun set through the city down the Southern Motorway, along the Waikato River, between the hay fields in the Waikato, past the turnoff to Tauranga, slow down through Tirau, veer right away from Rotorua, along the curving roads through Tokoroa, crawl for roadworks, then a steady 100km sweeping through the forested areas before landing in Taupo. I enjoyed the driving. Sometimes I’d pause the CD I was listening to and listen to the silence through the open windows.

The CD was most often one of the Alex Rider books by Anthony Horowitz, read by Oliver Chris. It’s an exciting series read very, very well. It’s a joy to find a good reader. For me this is someone who is clear in their diction, who changes their voice/accent slightly for different characters, and who is reasonably flat in their delivery. (By that I mean their voice isn’t swooping up and down the register. A little bit of expression is good, too much and I feel they’re cueing me into their interpretation of the words rather than letting me make my own interpretation. It’s not a fucking song.)

My favourite memory of that time is driving extra blocks once I reached Taupo in order to hear the end of a chapter. I think I eventually parked up in the supermarket car park as I wasn’t 100% sure I wasn’t going to get lost. I’m reminded of this episode in my life because I tweeted about it ‘Maybe a good reader? I drove for extra blocks to hear @oliverchris finish a Alex Rider chapter.’ and got a reply from @oliverchris ‘…that may be the nicest thing I’ve ever heard. I’m very proud of those. Enjoy.‘ How cool is that?

One of the techniques I use when I am worried and/or angry is to ask myself whether it is my worry or anger or whether I have soaked it up sponge-like from someone else. I have a low-key demeanour. It’s really easy for me to be influenced by someone who is more energetic – either positively or negatively. (I used to share an office with someone who was very demonstrative. It drove me a little bit crazy I think.) Twitter is a diabolical place for this. 140 characters is enough to BE OUTRAGED/EXCITED BY THE STUPID/AWESOME DICKS/PEOPLE in the world. Knowing that that the worry or anger is, or is not mine is the first step towards getting rid of it for me. Most often the way to do that is to make a plan for dealing with it. This could be going to the gym and working off any jitters. Or it could be watching something that will override the emotion and replace it with something else. This is what works for me.

Tagged Coping, Do you ever feel like someone else is living your life?, Life, Reframing
Leave a comment
Movies, Uncategorized

I went to see Toa Fraser’s cinematic version of the Royal New Zealand Ballet’s Giselle. I enjoyed it very much. It’s the stage show (shot from some interesting angles) and every so often veers into the rehearsal room or into regular life. I found the ‘interval’ section and the pas de deux in the rehearsal room the most affecting. Lovely work.