I've been watching the Pekapeka penguin. According to the description "During this time of the year it is dark most of the time in Anractica." My sister thinks it looks bored. Maybe that's what penguins do in the winter. Stand around, scratch and occasionally flap their wings.
Leave a comment
Uncategorized

To accompany the exhibition Vishnu: Hinduism's Blue-Skinned Savior Brooklyn Museum are showing a smaller group of Indian paintings that have been crowd sourced.?? The project was inspired by 'Blink' by Malcolm Gladwell about how humans judge and make choices. The Museum's online community were invited to take part in a three stage process. "The first stage explores split-second reactions: in a timed trial, participants will be asked to select which painting they prefer from a randomly generated pair of images. Next, participants will be asked to write in their own words about a painting before rating its appeal on a scale. In the third phase, participants will be asked to rate a work of art after being given unlimited time to view it alongside a typical interpretive text." According to the exhibition description "this online experiment and resulting installation will explore how our initial reaction to a work of art is affected by what we know, what we???re asked, and what we???re told about the object in question."

I'm excited that the Museum is exploring this. It's something that I'm interested in with regards to how individuals respond to performance. I like to know something about the process behind a show such as design inspiration, costumes or rehearsal process etc. I'd rather not know any detail about the story. I'm undecided as to whether I want to know the inspiration or background to the story (other than the bare bones) as part of the fun is in anticipating what comes next. Having said that I will go to shows more than once. (Yes, I watch movies more than once and I will watch "behind the scenes" and listen to commentary too. #nerd ) What does that say about me as audience? I'm not sure yet, it's something I'm still exploring.?? What about you? Do you know what you like to know before you go and watch something?

Okareka Dance Company present a new work. They are currently rehearsing in the theatre next to the office. It sounds intruiging…

This is a new play by NZ playwright Paul Baker. It’s set at a fictional luncheon on the occasion of Mr Winston Churchill’s 88th birthday. The family – mum Clementine, son Randolph and daughter Sarah – are all overshadowed and cowed by the great man. The final character is Dr Jenkins who is originally applying to be Randolph’s research assistant but is lured into acting as man servant for the day. Yes, another dysfunctional, pill popping family with domestic help show themselves at Circa.
The script is witty. Ray Henwood (Winston) drawls all the best lines and gets the laughs. Helen Moulder is suitably exasperated as Clementine. Carmel McGlone (Sarah) staggers around the stage calling for another drink while ignoring the one right in front of her. Jeff Kingsford-Brown (Randolph) doesn’t have the intensity that I was expecting but he makes up for it with a forced brashness highlighting the ‘jolly joker’ aspect of his character. Byron Coll is fun to watch as Dr Jenkins. He dips in and out of the action interacting with characters in unexpected ways. I’m not so keen on how it wraps up. I can see where Baker wants to go with it but I don’t think he quite manages it. I also didn’t understand the design for this show. It’s set to the corner so the audience sits on two sides of the stage. The wallpaper is covered with pictures of the Churchills and pictures of the war. Somehow the set manages to be both expensive and cheap at the same time. I found it quite distracting.
Overall, it’s a clever if slightly strange play that is an entertaining, easy night out. 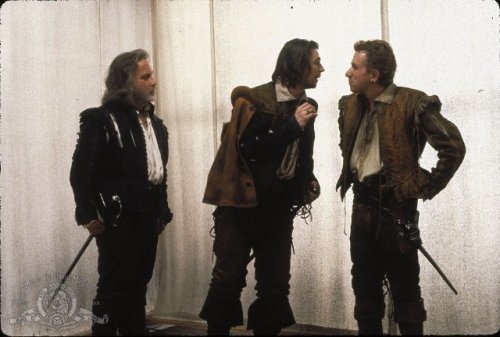 I have found another movie for my ever evolving top ten list.

Rosencrantz and Guildenstern are dead.

It’s the story of minor characters in Hamlet and what they are doing when they are not on stage. The script is full of word play. That makes me very happy

“It happens in an awkward and possibly crowded and noisy place – near public transportation, shops or other distractions…there is often no place to sit and standing around can make you feel conspicuous. We do not know who the performer is or if she is any good. This feeds into the anxiety that many people have about their own perceived lack of taste or knowledge. They do not want to be seen by others to be over-enthusiastic about a mediocre performer or under-appreciative of a good one. It is safer not to listen and thus not to betray any opinion at all…And even if we do stop to listen and enjoy the experience, what would be an appropriate way to show appreciation? Clap? Say “thank you”? Make a contribution? …If you give too little you look stingy; if you give too much you look like an easy mark. All of this makes for a very awkward situation and it is much easier not to stop in the first place. Better to get on with your business.”

I’ve seen these things over the last couple days –

Happy birthday @robyngallagher who turns 15 this month. At least, her website does. To help the rest of us get to that milestone she’s shared “some tips on how to make a blog for your personal writing that won’t drive you crazy or leave you consumed by a sense of failure and self-loathing.” The rest of her writing is pretty fuckin’ good too. e.g. Napier 5, Key learnings from watching every Madonna video, Tokyo 5 (rev.ed.) and that’s as far as I got before I thought I should stop otherwise I’d be linking pretty much everything.

Ten strategic communication lessons from the Alasdair Thompson fiasco to help out anyone who may be in that position in the future. Plus if you want to know how that day went for him, Moata has the low down on that.

In the Listener Toby Manhire has a run down of online reaction to the Government announcement about what will happen to some homes in Christchurch.

In ‘NZ’s official languages’ news – you can get kai moana from the recently opened Tokoroa Countdown and check how to say ‘yummy’ using sign language on the new online dictionary of sign language. Tumeke!

Off to see this play. I went to a reading of it – last year? the year before? – in Auckland so it will be interesting to see how it works as a fully realised show.
Tagged blogjune, circa, wellington
Leave a comment
blogjune, Uncategorized

The dog has nothing to do with this

The other night I was standing at the sink when I started laughing. I'd just noticed that I was doing all these things
1. Washing and drying dishes
2. Waiting for biscuits to finish baking
3. Planning my outfit for the next day
4. Listening to the introduction music on the Wolverine DVD (Terrible btw. The Almighty Johnsons has the best looping intro music of any DVD I've ever watched.)
5. Making dinner
6. Making lunch
It was particularly hilarious because I'd had a rough day but at that moment I was feeling calm and serene. Go figure.

R??aumoko is god of earthquakes and volcanos. He's a very busy boy and we all wish he would just settle down.